Gordon Moore’s 1965 prediction of continued semiconductor device down-scaling and circuit up-scaling has become a self-fulfilling prophesy in the past 40 years.  Open source code development and sharing of the process modeling software SUPREM and the circuit modeling software SPICE were two critical technologies that enabled the down-scaling of semiconductor devices and up-scaling of circuit complexity. SPICE was originally a teaching tool that transitioned into a research tool, was disseminated by an inspired engineering professor via tapes, and improved by users who provided constructive feedback to a multidisciplinary group of electrical engineers, physicist, and numerical analysts.  Ultimately SPICE and SUPREM transitioned into all electronic design software packages that power today’s 280 billion dollar semiconductor industry.

Can we duplicate such multi-disciplinary software development starting from teaching and research in a small research group leading to true economic impact?  What are technologies that might advance such a process?  How can we deliver such software to a broad audience?  How can we teach the next generation engineers and scientists on the latest research software?  What are critical user requirements?  What are critical developer requirements? What are the incentives for faculty members to share their competitive advantages?  Can real research be conducted in such a web portal?  How do we know early on if such an infrastructure is successful? Can one really transfer knowledge from computational science to other areas or research and into education? This presentation will bust some of the myths and perceptions of what is possible and impossible.

By serving a community of over 330,000 users in the past 12 months with an ever-growing collection of over 4,700 resources, including over 370 simulation tools, nanoHUB.org has established itself as “the world’s largest nanotechnology user facility” [1]. nanoHUB.org is driving significant knowledge transfer among researchers and speeding transfer from research to education, quantified with usage statistics, usage patterns, collaboration patterns, and citation data from the scientific literature. Over 1,200 nanoHUB citations in the literature resulting in over 17,300 secondary citations with h-index of 62 prove that high quality research by users outside of the pool of original tool developers can be enabled by nanoHUB processes.  In addition to high-quality content, critical attributes of nanoHUB success are its open access, ease of use, utterly dependable operation, low-cost and rapid content adaptation and deployment, and open usage and assessment data.  The open-source HUBzero software platform, built for nanoHUB and now powering many other hubs, is architected to deliver a user experience corresponding to these criteria.

Gerhard Klimeck is the Reilly Director of the Center for Predictive Materials and Devices (c-PRIMED) and the Network for Computational Nanotechnology (NCN) and a Professor of Electrical and Computer Engineering at Purdue University. He was previously with NASA/JPL and Texas Instruments leading the Nanoelectronic Modeling Tool development (NEMO). His work is documented in over 400 peer-reviewed journal and proceedings articles and over 210 invited and 400 contributed conference presentations. He is a fellow of the IEEE, American Physical Society, and the Institute of Physics. 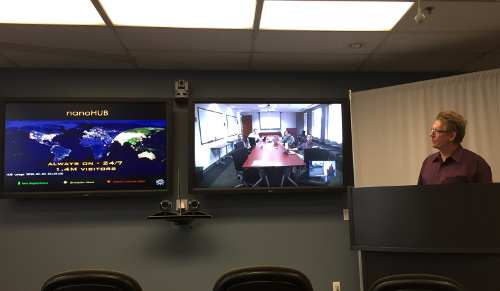