Louisiana researchers and universities have been involved in a concentrated, collaborative effort to advance state-wide cyberinfrastructure: computing systems, data storage systems, advanced instruments and data repositories, visualization environments, and people, all linked together by software and high performance networks. This effort led to a set of interlinked projects that started making a significant difference to the state and created an environment that encouraged increased collaboration. Part of this environment included participation in the US National TeraGrid infrastructure, and US National networks. This talk describes the overall effort, the new projects and environment, the results, and the lessons learned.

Daniel S. Katz is a Senior Fellow in the Computation Institute (CI) at the University of Chicago and Argonne National Laboratory and is currently a Program Director in the Division of Advanced Cyberinfrastructure (formerly the Office of Cyberinfrastructure) at the National Science Foundation. He was previously TeraGrid GIG Director of Science. He is also an affiliate faculty member at the Center for Computation & Technology (CCT), Louisiana State University (LSU), where he was previously Director for Cyberinfrastructure Development from 2006 to 2009, and Adjunct Associate Professor in the Department of Electrical and Computer Engineering at LSU. He was at JPL from 1996 to 2006, in a variety of roles, including: Principal Member of the Information Systems and Computer Science Staff, Supervisor of the Parallel Applications Technologies group, and Applications Project Element Manager for the Remote Exploration and Experimentation (REE) Project. From 1993 to 1996 he was employed by Cray Research (and later by Silicon Graphics) as a Computational Scientist on-site at JPL and Caltech, specializing in parallel implementation of computational electromagnetic algorithms. Dan's interest is in the development and use of advanced cyberinfrastructure to solve challenging problems at multiple scales. His technical research interests are in applications, algorithms, fault tolerance, and programming in parallel and distributed computing, including HPC, Grid, Cloud, etc. He is also interested in policy issues, including citation and credit mechanisms and practices associated with software and data, organization and community practices for collaboration, and career paths for computing researchers. He received his B.S., M.S., and Ph.D degrees in Electrical Engineering from Northwestern University, Evanston, Illinois, in 1988, 1990, and 1994, respectively. He is a senior member of the IEEE and ACM, and serves on the IEEE Technical Committee on Parallel Processing's Executive Committee and the steering committees for the IEEE Grid, Cluster, and e-Science conference series. 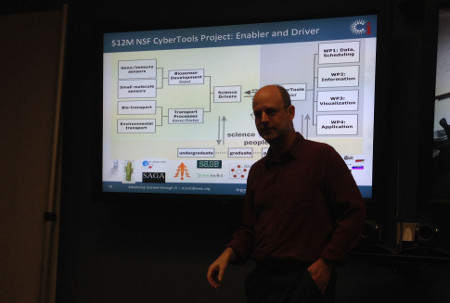